How Creating Systems Can Make Your Microbusiness Rock 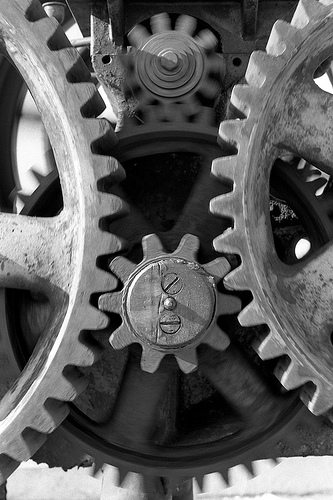 Anyone who writes books or articles, creates visual art, does random freelance projects, records music, or maintains a website/blog is running a small business…whether they want to admit it or not.

On the surface, the business model is incredibly simple (make something and maybe make money off it) but look a little deeper, and you’ll see that this creativity-based microbusiness is actually a system of product development with a collection of interdependent subsystems for marketing, distribution, accounting, and customer service. Each subsystem has a series of discrete actions that must be performed so all the subsystems function smoothly.

Some people might say that this kind of analytical, logical, and rational systems-thinking doesn’t come naturally to people pursuing the above kinds of microbusinesses.

But you and I know this is bullshit.

The problem is we’ve never learned how or why this kind of systems thinking is necessary.

If you’ve already designed systems that allow your microbusiness to operate with only minimal involvement from you (doing the fun, creative ideation stuff and leaving the rest up to hired help), then you probably don’t need this article.

For the rest of us, we have some homework to do.

How Can Systems Thinking Help a Microbusiness?

By creating systems, you’ll be able to spend more time working on your business rather than in your business. You put in a little work up-front to create the systems and subsystems, then you let these systems guide your daily efforts. Your systems will allow you more time to focus on the activities that matter: creating your product and generating ideas.

The idea is to create a business that is replicable, even if you have no intention of replicating it. Why? Documenting systems exposes inefficiencies in your business model (or lack thereof). For an example, consider successful franchises.

While franchise owners may make lower profits, their failure rate is considerably lower than ‘traditional’ startups (according to statistics in Gerber’s book, 80% of all businesses fail within the first 5 years, while those that follow a franchise format have a success rate of about 75%).

Franchises have a lower failure rate because every subsystem of the business is documented. The major benefit of buying a franchise is that you get access to a model/system that already works. So long as the people running the business are competent enough to follow the operations manual, the overall system operates as it should.

What is a system in the context of a creativity-based business?

Just like a car, every business (even freelancing) is an individual system composed of several subsystems. In a car, the subsystems include the engine, power train, braking system, cooling system, climate control system, stereo system, etc. Each of these can be broken down further subsystems; in the engine, you have these little subsystems like the alternator, water pump, and fuel injection system.

Mechanical excellence occurs when these subsystems work together flawlessly. Trouble starts when one subsystem breaks down. Depending on how important that subsystem is, the problem could be anything from a non-working radio antenna to a blown head gasket.

A microbusiness is no different. Microbusiness systems include production, marketing, fulfillment, accounting, and more. Let’s put this in the context of a singer-songwriter.

Whether she knows it or not, she has a production system, probably a notebook and a tape recorder. She has an idea, records a few ideas for the melody, then maybe writes a few lines. Eventually, she has a full song. That’s only one subsystem within her production system.

As a performer, her other production system is her performance (which overlaps with marketing). To secure a performance, she switches over to a different system that involves identifying venues, making contacts, and sending press kits. Each of these could be broken down into further subsystems (research, cold-calling & followup, and design).

Booking shows is a pain in the ass, but a system could make this easier. Here’s how:

Systems are also helpful when you’re working on those parts of your business that you don’t excel at.Why? Because documentation shows you where you’re weak. One of the most important steps in learning is figuring out what you don’t know.

My Brief Experience Creating Systems for a Small Business

(Or, how an intoxicated hillbilly made a book publisher’s life easier)

When I worked for the book publisher, the owner asked that I ‘build systems.’ I smiled, nodded, and said ‘sure.’ I had just broken my foot, and the doctor had given me a bottle of pretty strong pain pills).

For the most part, the owner had been running everything himself and keeping most of the knowledge in his head.

At the time, I didn’t know much about the methodology (and I’m still learning, hence this long-ass post), but I set about dissecting each function on the operations side of the business. I also knew that I would be leaving to work in Korea, and that I needed to create something that would outlast me.

Almost intuitively, I was forced into creating systems, albeit on a journeyman level.

The problems before me were staggering: no inventory system, very little bookkeeping, and mountains of neglected paperwork. Invoices were simple created in Word and two copies printed. Yikes!

Using what I had learned from David Allen’s GTD methodology, I started by creating a simple system for processing mail and paperwork. While doing this, I actually found check for just under $200.

My next task was inventory. This was easy; install a free version of Anybook and enter our inventory. Anybook also has an invoicing function, and this became the core of our bookkeeping system. For the first time in ages, the owner had accurate records of his revenues.

Finally, I set up a reasonably efficient method of order fulfillment.

Along the way, I documented what I did and used Google sites to create an operations manual with step-by-step instructions on how to run

The owner was more than happy and, nearly two years later, he’s still chugging along with the help of a couple interns.

Lesson: Even a half-assed system setup by an intoxicated hillbilly is better than no system at all.

When a business has 1000 little jobs piled up, documenting a step-by-step operations manual that describes an organization’s systems seems like too much extra work. However, the operations manual prevents those jobs from piling up in the first place.

Two books illustrate the nature of systems (and drive home their importance). I read them over the weekend while preparing for this post. Here are brief summaries and Amazon affiliate links 😉

Work the System by Sam Carpenter

Work the System: The Simple Mechanics of Making More and Working Less

describes how one man went from nearly 15 years of working 80-100 hour weeks to a2-hour week…while increasing his profits by a factor of 25. The story would be a hokey revelation story if the (admittedly self-reported) results weren’t so awesome. To paraphrase,

“I was laying in bed, nearly dead from exhaustion, facing financial ruin, when I imagined my organization from an outside and slightly elevated perspective. I began to see my business as a primary system with many subsystems. The mechanics of the business became clear to me. Before, I spent all my time putting out fires because the subsystems were carrying out their routines without order or direction. So I methodically isolated and documented each subsystem. Now I run the highest quality telephone answering service in the United States.”

The way Carpenter describes the process of systems creation is like imagining hydrological engineers creating a navigable waterway. Without modifications, the water may eventually drain into the ocean, but along the way it will meander, create oxbows, branch off, and prove impassable for boats, as it has a variable depth. Boats may still use the waterway, but during the dry season they’ll sometimes have to get out and carry their crafts. (The slow boat trip between Siem Reap and Phnom Penh is a good example of this).

With a tremendous amount of upfront work by the engineers, the boats can reach their destination faster and with less effort. (In fact, the title of Chapter 9 is ‘We Are Project Engineers.’)

Creating systems is no different. By pinpointing specific systems for improvement, dissecting them, tweaking the efficiency, and documenting those systems, people running their businesses (big and small) will be able to reach their overall goals faster.

I have two problems with this book the overwhelmingly glowing Amazon reviews fail to mention. (Maybe I missed them due to the stupefying effects of jet lag)

To be fair, buried in chapter 14 is this: “put the book down-yes, right now, this second…and write ‘Strategic Objectives’ at the top.” That’s a start, but after that, the reader has to do a fair amount of work putting the rest of the instructions in a clear and easily executable order.

I suspect this book will go to a second edition. Hopefully these issues will be addressed.

The E-Myth Revisited: Why Most Small Businesses Don’t Work and What to Do About It

by Michael E. Gerber (published about 15 years before Carpenter’s book) states that the reasons most businesses fail is because they’re run by technicians. Technicians are people who are successful at their job when they work for someone else but are beaten down with the demands of running their own company. A technician does one thing exceptionally well (writing, for example) but sucks at everything else (marketing, tally receipts, not mumbling, etc.).

His example is a woman who enjoyed baking and making delicious apple pies…until she started a pie company. Like Carpenter, she ended up working a soul-crushing number of hours. Her problem was this: pie-baking was only one part of running the bakery. She was also in charge of sales, marketing, research, accounting, etc. The ‘extra’ work was grinding down the poor pie lady; she began to hate her once-beloved pies.

Gerber’s solution: Imagine your business as if it were the prototype for 5,000 like it. Work on the systems and structure of the business. Create an operation with well-defined roles that can be staffed by people of the lowest possible skill level.

In addition to being a technician, a doer, a small business owner must also think like a manager and an entrepreneur. The entrepreneur looks ahead for opportunities, lives in the future, and is the source of innovation. The manager ensures things run in a smooth and orderly manner

Blending these roles allows the small business owner to starting working on their business; as with Carpenter, the idea is to think of the business as a system with several interdependent subsystems. Once the roles people (or the owner) play(s) within a business are defined and documented, the business starts to become a self-sufficient machine, like a car with interchangeable parts.

That said, this isn’t a book about franchising. Not at all. He only uses the franchise model to demonstrate the point that franchises have a built-in infrastructure that many small start-ups lack.

While I think the action plan laid out in this book is a little better than Carpenter’s, this book is far from perfect; the ongoing dialog with the pie shop owner feels a little stretched. We never find out if she actually improved her business and followed through with the expansion plans. There’s some stuff about the pie woman’s spirit horse that left me scratching my head.

If you really want to get a good grasp on how systems thinking works, you need to apply what you just read. You’re smart, and you know that consuming information without taking action just ins’t enough. So, here’s your chance to really learn something cool.

Previous post: How to Make $100 Per Month Writing Articles for the Intertubes