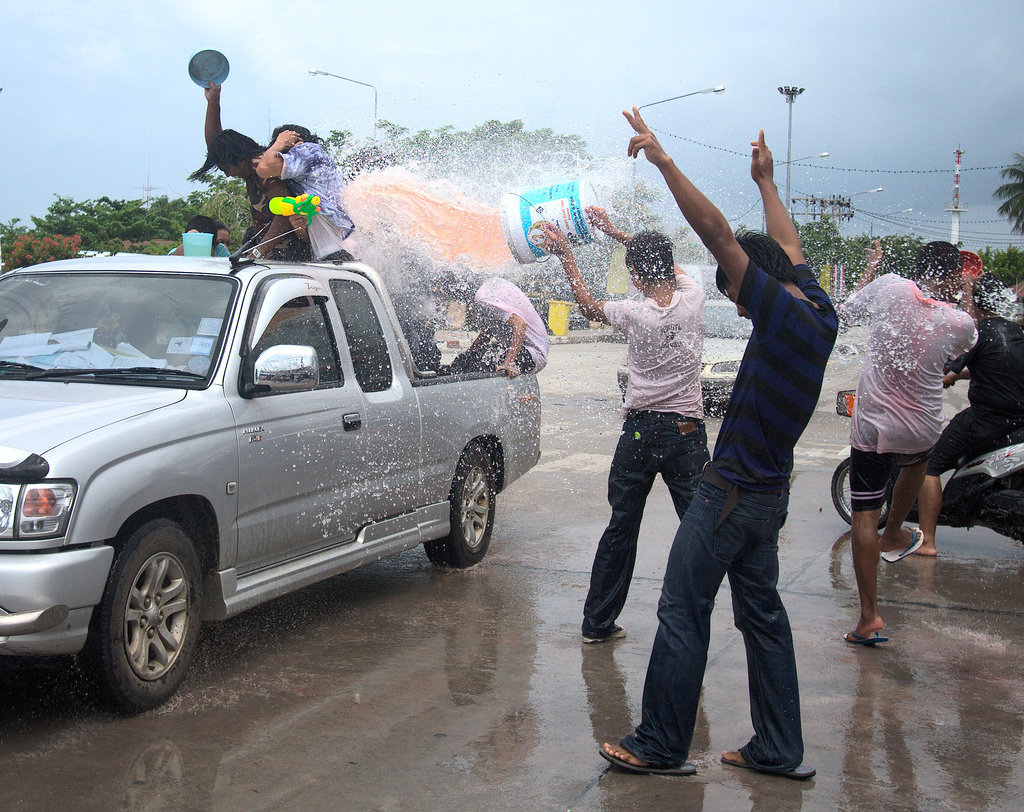 The Songkran festival celebrates the start of the traditional Thai New Year. Originally, people sprinkled water over those they respected in order to help wash away the bad deeds of the previous year. Festivals evolve, of course, and Songkran is no different.

Today, during the Songkran festival in Chiang Mai, Thailand, people pelt each other with buckets of water. A moat runs around the old city, providing celebrants with thousands of gallons of ammunition. The streets run deep with (admittedly nasty) water from the Chiang Mai moat.

Everyone in the city, young and old, Thai people and foreigners, carries water guns and buckets. People stand on sidewalks or ride around on the backs of trucks and toss water on each other. Many of the truck people use big blocks of ice to cool their barrels of water; even though the outside temperature is around 38C/100F degrees, that cold water hurts!

Even though the festival has changed, the original idea remains the same: when you hit people with water, you’re doing them a favor; it’s a sign of respect. All this is done without malice. In fact, I was amazed to see that Thai people would often thank the person who dumped 100 liters of brownish moat water down their back.

If you leave your house during Songkran, you will be pelted with water. It’s part of the fun. So you have a simple choice: you either stay home and stay dry, or you go outside and risk getting drenched.

Once you’re outside, you have another choice: you can simply be drenched or you can get a bucket of your own and drench those around you (and be thanked for doing so).

During this festival, I realized writing, or any act of creative production, is the same way.

Why Songkran is like writing (or any other creative act)

When you write, you step outside of your comfortable house.  You run the risk of being doused, of having some kind of feedback being dumped over your head, whether its criticism, indifference, scrutiny, or praise.

During the first day of Songkran, I felt like I was constantly under attack, like being doused with water was an act of aggression. (Some cultural baggage is hard to shake). But as the festival went on, I realized it’s all in good fun. No one is out to harm anyone else.

Getting feedback and criticism is the same; you might feel like you’re being ruthlessly attacked, but it really is for your own good. The people who take the time to give you a serious critical response, they’re doing so out of a desire to help. Instead of washing away bad deeds, they’re trying to wash away what they see as mistakes, things that could be improved upon.

Of course you’ll sometimes have sadistic critics who put rocks in their buckets and offer only scathing attacks without any positive suggestions. Fortunately, they tend to pass by pretty quickly.

At the same time, putting your work out there is like taking your own bucket, filling it with moat water, and throwing it onto the crowd. Sometimes you hit your target, sometimes you don’t. Most people don’t care one way or another if you hit them, but sometimes you’ll really make a splash (pardon the pun) and you’ll be thanked for your efforts.

But if you want to hit anyone, you have to go outside. You have to participate. And when you participate, you run the risk of getting drenched. It’s worth remembering that no matter how wet you get, you’ll dry out eventually.

The question, then, is this: will you go out and participate in the fun? Will you run the risk that you might not hit anyone? Will you risk being hit with rocky water? Or will you stay in your house, stay safe and dry, and miss out on all the fun?

As for me and my bucket, we’re going outside. There’s still water in the moat.