In Defense of Handwriting (plus tips!) 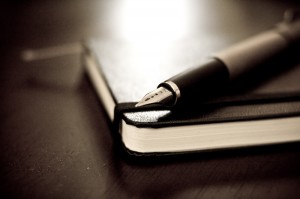 Three years ago, I received a box of dusty old books. Most were over 50-120 years old. One of the books was Coleridge’s ‘Rime Of the Ancient Mariner.

Everything about the book  suggested attention to detail and craftsmanship: the blue embossed binding,  the lithographs of castles, flowers and  vines that surrounded every page, and a personal note in the front.

The note read ‘To my dear Emma, May you enjoy this as much as I did. Joseph. March, 1882.’ It was written in a Spencer script, the letters smooth and flowing. Just a simple message, but it looked so nice it seemed to be a part of the book. I wish I had pictures  to share, but the book is back in the U.S.

At the time, I wondered how people wrote like that and why no one writes like that today. The answer is pretty simple: in the past, good handwriting was an important skill, just like typing or knowing how to make lolcats in Photoshop. Before typewriters and computers, you were judged by the quality of your handwriting. Quality handwriting was drilled into students through hours of exercises.

Today, teaching and learning quality handwriting is almost an afterthought. I don’t remember exactly how much time I spent learning penmanship skills, but it wasn’t enough. And I had a disadvantage: I’m left-handed. I was told to use my right hand or to write with my book turned sideways. That’s like telling a cow not to moo (Click here to learn more about the relationship between the word ‘left’ and all things evil).

In a lot of U.S. school systems, especially since the 1980s, some decision makers felt that keyboards and technology would replace the need for handwriting. By the time these kids are adults, the thinking went, you’ll have to buy ink pens in antique stores and handwriting won’t matter. Also, as schools sought to cram more content-based materials in, basic skills like handwriting received less and less time in the classroom.

I don’t deny that typing and tech skills are important. The faster and more accurate  you can type, the better, and because of my early access to Apple IIs, I am comfortable with all types of computers. But, the mistake here is believing that typing is a replacement for writing. No. Typing and writing are like singing and dancing. One isn’t a substitute for another.

Why Write By Hand?

The pen and paper aren’t going anywhere. As long as we are thinking people who engage with the world around us, as long as we have love letters to write, bureaucracies to deal with, and dirty messages to write on bathroom stalls, we will need to write things down.

Before I even start typing a post, I usually write all my ideas out onto a mind map, then use that to make an outline. Writing on paper, I’m not constrained to put things in a linear order.  And, if I want to draw little sketches of the dead plant on my desk, I can do that, too. While typing, I have to interface with a keyboard and abide by its restrictions.

Writing on paper is a more visceral and physical experience, unmediated by screens  and machines.

Why Have Good Handwriting?

Besides assisting my admittedly puny mind, I would also argue that good penmanship increases the usefulness and impact of whatever I write. If I’m taking notes on some topic, and I  take the time to make the notes look decent, I get a lot more out of the notes and feel less resistance to go back and reread them.

Writing neatly will initially take a few moments longer, but it will save time if and when you need to read over what you’ve written. If you’re typing something you’ve written by hand but struggling to decipher the words, squinting, struggling, turning the paper upside down, you’re spending a lot of extra time. Had you written a little slower initially, reading what you had written would be far simpler.

If you write a note to yourself that you can’t read, it doesn’t do you a damn bit of good, does it?

Going further, in some occupations good handwriting can save lives. In 1999, RamonVasquez died because the pharmacist misread his doctor’s ugly-ass handwriting (link).

There is the visual  appeal of looking at a page of nicely printed script. A well-printed page has more perceived value, both for yourself and others. Sadly, if you have messy handwriting, the people you’re writing to will probably think you’re a moron. Of course, you  know better, but still.

Let me argue the counterpoint as well: good penmanship isn’t always important. Quality should vary depending on your purposes. If you’re just trying to get some ideas out as quick as possible, don’t let good handwriting stand in your way. Quick and dirty has its place, and you can’t let a properly formed ‘a’ slow you down.  This is when cursive comes in handy. For me, legible cursive is still a lot faster than anything else.

For the past couple months month, I’ve been trying to learn all I can on improving my own handwriting. Here are some things I’ve found useful so far.

Tips for How to Improve Your  Handwriting and Penmanship

Write Slower For me, this was the most easiest and most effective way to improve my handwriting. Most writing is done with little regard to the actual act of dragging a pen across paper. By simply slowing down, being conscious of, and paying attention to this act, you should see some immediate improvements.

Write Bigger You don’t have to make balloon letters, but slightly bigger letters are easier to make and easier to read. Don’t worry about taking up too much space. You can always buy more paper.

Back to Kindergarten Sometimes you’ve got to go back to the basics. Print off some guide sheets and practice basic letters. The Times article I mentioned earlier has instructions for a nice italic font.

Get Your Body Into It Several sites recommend using using your shoulders and arm to make letters instead of using your hand. This helps a bit, but it requires you to sit at a desk and have good posture. I like to write while slouching on the couch.

Get  an Awesome Pen Not all pens are created equal. Find a pen that doesn’t require a lot of pressure. I like Pilot G-2 07s, and I hear fountain pens (like the one in the picture) are good, but I’ve never used one.

Think of Writing  as Typography and Drawing As an experiment, I tried to write in a Garamond script. Doing this, I had to start thinking of printing letters as drawing rather than writing. The results were impressive. If you’re patient, try copying some typeface style sheets. Smashing magazine has a nice list here.

Experiment The way you hold your pencil and your wrist will affect the way you write. Try different hand positions, writing styles, slants, etc until you find one that works for you.

IAMPETH is a non-profit that promotes beautiful handwriting and calligraphy. They have an excellent selection of lessons in Spencerian Script, Copperplate, and skills as well as printable guide sheets.

Paperpenalia has some solid tips on improving handwriting, especially the ones about using your shoulder muscles. I’m not sure about the pens they’re selling, though.

Before and  After Shot 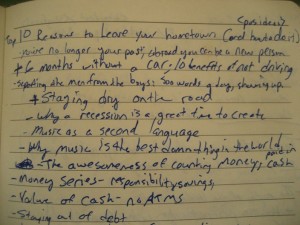 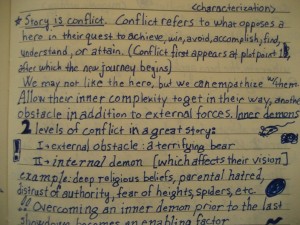 The photo on the left is from the middle of June. As you can see, it looks like roadkill. The one on the right is from the end of September.

How is your handwriting and penmanship? Do you prefer to type and handwrite drafts? Can you still write in cursive? Is cursive obsolete? Am I wrong that good handwriting is useful? Will electrodes on our brains connected to printers eventually replace old school handwriting? Holler back.

Top of the page photo credit: The Mad Guru