Review: The War of Art

Today I’m doing a review of The War of Art: Break Through the Blocks and Win Your Inner Creative Battles

by Steven Pressfield. Normally I leave the book reviews to the critics, but I saw this book in the library and thought the subject matter would be quite useful for readers of this fine blog. 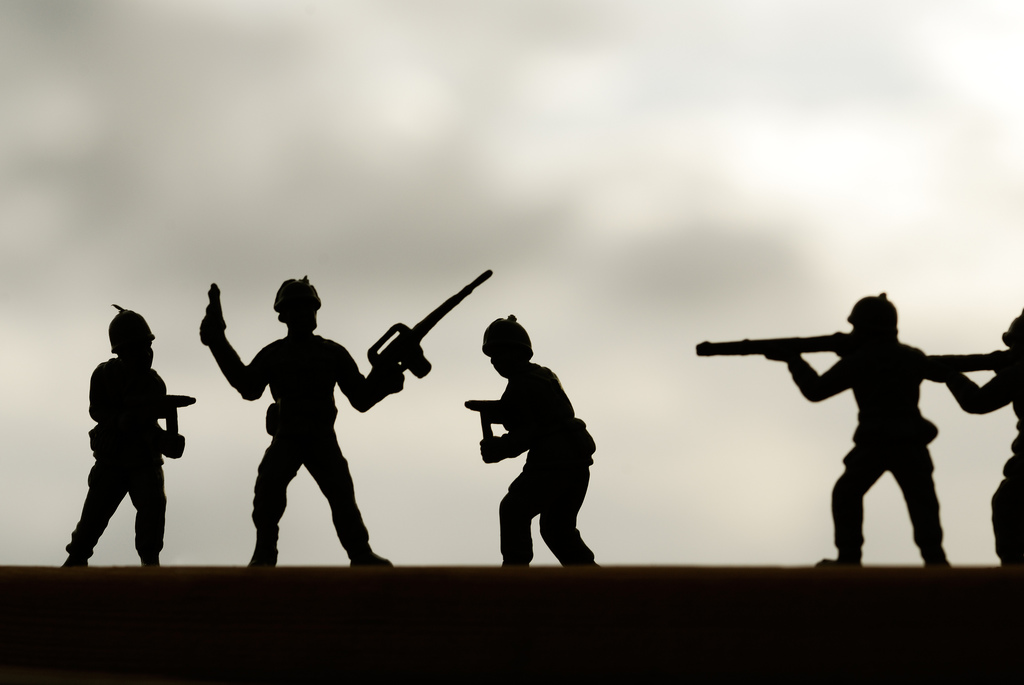 In The Art of War, Sun Tzu coined the famous phrase ‘know your enemy and know yourself and you can fight a hundred battles without disaster.’

Is the act of making art a war? Steven Pressfield, author of The War of Art

(also of The Legend of Bagger Vance

and several historical novels), says so.

According to Pressfield, anyone who creates anything is engaged in a perpetual struggle. Their enemy? Resistance, the internal struggle we face to create something that goes beyond fulfilling our immediate needs. Or put another way, this is a struggle between the Self and the Ego. More on this later.

Sun Tzu also recommended (and I’m paraphrasing from memory) complete annihilation of your enemy, otherwise he could come back to torment you once he regains his strength.

Unlike Sun Tzu’s enemies, Pressfield’s enemy can never be destroyed. Resistance must be defeated anew every single day. Fortunately, this enemy is vulnerable, assuming you understand its nature…and your own.

The thesis of Pressfield’s book is as follows:

Resistance is the ever-present enemy of people who do work they’re passionate about, the work they’re meant to do. You can combat and neutralize Resistance’s power by adopting a professional attitude towards your work. Once you adopt this attitude, something ‘magical’ happens and your work becomes transcendent.

Resistance is an internal force, the ‘enemy within.’ Defined as self-sabotage, resistance usually manifests as avoidance, procrastination, or inaction caused by fear paralysis. Resistance, according to Pressfield, is invisible, insidious, implacable, internal, impersonal and universal. Pressfield elaborates on each of these adjectives (and more), unafraid to use a clever metaphor or simile to illustrate a point. For example, in the section ‘Resistance is infallible, Pressfield writes:

“Like a magnetized needle floating on a surface of oil, Resistance will unfailingly point to true North-meaning that calling or action it most wants to stop us from doing.”

Here’s my first (albeit minor) point of contention.

Almost anything we need, want or have to do will cause some resistance to manifest. Just because I experience massive resistance when I think about fixing my broke-ass car doesn’t mean fixing that car is my life’s work. Perhaps I’m missing the point.

Pressfield goes on to point out Resistance in its many guises: the way peers may be recruited as allies of Resistance when an artist starts to conquer Resistance; the people around her “begin acting strange…they are trying to sabotage her” because they are experiencing Resistance of their own. They pressure her either explicitly or implicitly to backslide.

Resistance also pops up the artist’s tendency to quit at 99%, procrastinating work in order to ‘heal.’ (Is this a stab at Julia Campbell’s The Artist’s Way

? People who’ve read this work will know what I mean.)

As I read, I couldn’t help but identify where Resistance has dug its claws into me at one point or another. But like horoscopes, it’s hard to read this kind of work and not find descriptions applicable to your own life.

I would add one thing to this section. I think Pressfield wrote this book on a typewriter while living in a tent. He makes no mention of digital distractions (email, internet research, SMS) nor of learning to separate proactive and reactive work. It’s safe to assume, though, that mindless internet browsing is just another manifestation of Resistance. Pressfield does, however, imply that he follows something of a low-information diet. In one section he mentions completely missing Watergate because he was too busy writing. Impressive.

By turning pro, Pressfield doesn’t mean ‘making money.’ Turning pro is a shift in mindset. He wrote that from the time he ‘turned pro’ until he made his first real money was about a decade.

Turning pro here means doing what anyone does for a regular, ‘normal’ employment. To paraphrase Pressfield’s definition: A pro shows up every day no matter what, stays on the job all day, and is in it for the long haul. For the pro, the stakes are high. Pros accept payment for their work (even if they don’t always make an income). Pros also master the technique of their work, have a sense of humour about their jobs, and receive real-world praise or blame.

Pressfield makes an interesting point in his definition of a professional: Professionals “do not overidentify with [their] jobs.” A professional’s identity is separate from their job descriptions. This is necessary because, when a person strongly identifies with being a writer, musician, painter, etc., they are ‘overterrified’ of failure and ‘overly invested in its success.’ A professional is objective and disassociates themselves from their work. They are not their work. If their work fails, that doesn’t make them a failure.

Some other points worth noting about turning pro:

“A pro views her work as craft, not art,” even though she knows there’s still some magical stuff going on. In other words, she doesn’t wait on inspiration. She starts working with or without it, “in anticipation of its apparition.”

A professional ‘accepts no excuses;’ she doesn’t choose to take a day off because she has a mild hangover or needs to fix her car(my own notorious excuses).

The third and final section talks about the muse and, finally, identifies the cause of Resistance. Muses, angels, daemons, geniuses, an input from the collective unconsciousness, all these Pressfield calls our allies, “equal and opposite powers…counterpoised against [Resistance].” These allies join us when we make the shift from being an amateur to a professional.

How does one summon these allies? Through work. That’s it. Sound familiar? It should. But I’m doing a disservice to this section by summing it up in such a way, so let’s look a little closer.

“When we sit down day after day and keep grinding…The muse takes note of our dedication. She approves…we becomes like a magnetized rod that attracts iron filings. Ideas come.”

Following this simple but powerful truth, Pressfield talks about the day he finished his first book. He received this sage advice from his friend Paul: “Good for you. Start the next one today.”

Pressfield continues on in this vein for awhile before coming to the root cause of Resistance: the battle between the Ego and the Self.

Resistance springs from the Ego. The Ego is concerned with its own preservation and comfort, with stasis and the physical, material world. The Ego likes things the way they are. It likes to be in control.

The Self, however, is all about growth and moving to a higher plane. From the Self we get dreams, ideas, access to the collective unconscious. According to Pressfield, people meditate, dance, pray, and drug in order to access the Self.

Why does the Ego hate the self? According to Pressfield, “because the more awake we become, the less we need the Ego.” The Ego, because of its jealousy, employs Resistance to protect and preserve its power.

Pressfield ends the book with a simple call to action: listen to your Self and take action in order to find out what you were meant to do. Once you figure it out, do it like a professional. If you don’t explore and utilize your gifts, you hurt yourself and everyone around you.  If you do, great; you’re sharing your gifts with the world. 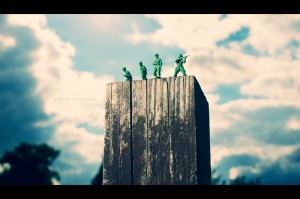 Pressfield was a Marine, and true to his past and the title of the book, he uses language that evokes the battlefield: “The writer is an infantryman. He knows that progress is measured in yards of dirt extracted from the enemy one day, one hour, one minute at a time and paid for in blood.” At other points in the book, he talks about against Resistance as one with life-and-death stakes. This brings me to one problem I had with the book.

Other reviewers have noted that at one point Pressfield implies that not following your creative dreams leads to cancer. This is indeed a dubious assertion. Pressfield briefly profiles Tom Laughlin, a psychologist who helps people facing terminal illness do things they’ve always dreamed of. Referring to cancer, Pressfield writes that Laughlin asks “is it possible…that the disease itself evolved as a consequence of actions taken (or not taken) in our lives?’ The work Laughlin is doing is laudable, but this section is best taken with several salty grains and washed down with warm bourbon. To be fair, the point of this section is to show that when people learn they’re going to die, their priorities shift dramatically. But to suggest neglected ambitions may cause cancer isn’t helping anyone.  We already know the stakes are high.

Overall, Pressfield is self-effacing, confident, competent, and occasionally funny. He’s been there, he’s done the work. And not to brag, but in the past year of blogging about creativity, I’ve come to many of the same conclusions about creative work and inspiration; I’m happy to see similar ideas from a guy who has been ‘in the trenches,’ doing the work, and has some respectable credits and credentials to show for it.

We all encounter Resistance in one form or another (procrastination, avoidance, distraction, paralyzing fear, etc.). Pressfield has done a great job of defining the enemy, offering a strategy for beating it into submission, and providing a clear picture of the victory spoils.

Full disclosure: The Amazon links are affiliate links. If you buy a book, they throw me coffee money.