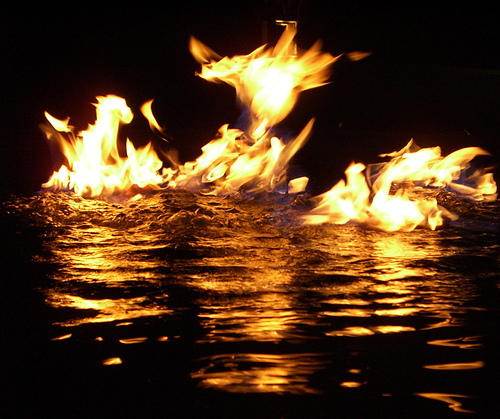 You can put out a fire by dousing it with water, dirt, foam, ammonium phosphate, or other specialized concoctions. However, one extinguishing agent won’t work for all fires. You can throw water on a grease fire, but this will cause flaming grease to spread (think napalm). Spray sodium bicarbonate on a gas fire and it will continue to burn.

Left unchecked, Resistance will spread, consuming much and leaving nothing but the burned-out frame of abandoned dreams. Use the wrong approach to defeating it, and the Resistance may spread.

For these reasons, it’s good to have a wide variety of Resistance-defeating tools at your disposal; what works for one manifestation of Resistance may not work for another.

[BTW: If you’re not familiar with the concept of capital R Resistance, check out my review of The War of Art. There you’ll find a additional strategies for defeating Resistance.]

1. Keep a time log. For me, this is a nearly fool-proof strategy for overcoming Resistance. Like a monetary budget, a time log makes you hyper-cognizant of each minute you spend during work time.

My time logs are pretty simple. In a blank page in my notebook, I note the date then make two columns:  one for start and finish time, and one for what I’m working on. I note any time interval greater than 5 minutes.

When used in conjunction with the Pomodoro Technique, a time log is one of the post powerful anti-Resistance tool I’ve encountered.  The Pav wrote a great article about time logs a few years ago.

2. Do 5 Minutes. The thought of tackling a massive project all at once can result in paralysis. If you’re having a hard time starting, just sit down and do five minutes. After that, you can go back to your favorite procrastinatory activity. A big project is hard, but five minutes is easy. Do five minutes, take a break, then repeat.

Frequently you’ll find that five minutes is the tiny push you needed to create positive inertia, earn a small win, and take the first step to changing your behavior.

3. Lower your Standards (a little). This might sound bad, but in fact it works quite well. Allow yourself to do work that isn’t up to your usual Olympian standards. Allow yourself to screw up, to fail. In most cases, the work won’t be as bad as you imagine it will be, and if it is, you can always improve it before you ship.

When you’ll settle for nothing less than world-class work, you’re setting yourself up for world-class pain. You’re also giving Resistance an easy way to turn a simple project into a quagmire.

4. Limit Your Time. Productivity geeks love cite Parkinson’s Law, and I’m no exception: Work expands to the time allotted to it. If you know you only have one hour to do your work, you’re going to have a much harder time making excuses and trying to weasel your way out of this work.

When I give myself a leisurely amount of time to work on my writing, for example, I usually fill an afternoon doing what should take an hour or two. But if I limit the drafting to, say, three tomatoes (1 tomato = 25 minutes hyper-focused work), I can usually finish it up in four tomatoes.

I’m currently recording an EP. In the past, I’ve allowed recording projects to take up months and months and ended up with substandard results.  This time, I gave the boys and myself a deadline of just over a month to finish tracking. So far, we’re far ahead of schedule. I’ll write more about this later.

Why do you think deadlines are so blisteringly effective?

5. Work in the mornings. This may not be for everybody, but for me I love starting work when I’m fresh from a good night’s sleep. I’m not sure why this is effective; perhaps the inner critic hasn’t had a chance to wake up. Maybe stress levels are lower and it’s easier to achieve flow.

Maybe each even that occurs throughout is a barnacle that attaches itself to the hull of a ship. The more barnacles you have, the more resistance you’ll encounter, and the longer you’ll take to reach your destination. Sometimes the barnacles begin to fall away in the wee hours.

I hope that these tools will help you win a few battles, but remember that Resistance is a relentless foe. As long as you’re doing something worth doing, you’re going to encounter Resistance. To paraphrase Steven Pressfield, the author of The War of Art

, “the war of art is ceaseless, a conflict where victory is measured in inches.”

You can procrastinate, whine, and complain, or you can get to your desk, stop overthinking, and do the freaking work.

The choice is yours.

Find something useful here? Then why not subscribe to Happenchance email updates? They’re free, convenient, and always unique.

Next post: You Are Your Own Worst Enemy, But That’s a Good Thing